Otto’s son, Walter Hirschland (my grandfather, Opa). He left Germany in the late 1930’s with his girlfriend … (my grandmother, Oma, Ruth Kapizky). They went to England, where she had family (an uncle?) who ran a chemistry lab. They gave Walter a job as a janitor in the lab while he awaited the paperwork for his application to go to America. By mistake, he disposed of some chemicals in the incinerator, and they exploded. As a result, he spent a bit of time in the hospital. 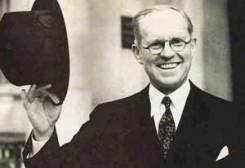 At one point during the war, England decided to kick out all the Germans who were temporarily residing there. While Walter was in the hospital, he received both the notice to leave England and the paperwork to go to America. He and Ruth went to the American Embassy to get everything in order. Walter’s hope was to go to America alone, then, once he had established himself, bring Ruth over to marry. He was informed the only way she would ever be allowed to America was if they were married in England, and if they went over together. Walter asked where the closest place was they could marry, and the ambassador volunteered to perform the ceremony. That was Joseph Kennedy.

Once in America, they met Franz. As Karrie (Dan’s cousin) mentioned, he gave them some money (I thought it was $100), and did ask not to be contacted.

It sounds like he sponsored a great many people, and I can imagine he didn’t have the time to play host to all those people. Walter and Ruth went to the agency that helped relocate Jewish immigrants (possibly the Jewish Federation?), and they were sent to South Bend, Indiana, where they had their 3 children there (Gerry, Evelyn, Sandy). When Evelyn developed breathing problems, they moved from there to the Los Angeles area (Long Beach).