Charles Hannam was born Karl Hirschland in Essen in 1925. He lived there until he left in May, 1939. He was the son of Max Hirschland, owner of the Levi Hirschland Bank, and had an older (by five-years) sister named Margot. 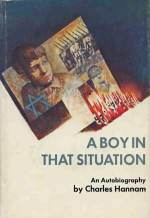 Karl grew up in a privileged life, though not as much as the children of the Simon Hirschland Bank owners. The Levi Hirschland Bank had fallen on hard times during the economic crisis following WWI, so much so that at least one historian has said that it went under. But family historians, as well as Charles in his book on his early life, A Boy in that Situation, differ. The bank still operated well into the 1930s, and Karl was being groomed to be a banker.

Karl grew up going to Services at what is now called the Alte Synagogue (built with funding from Simon Hirschland and others), but was not terribly observant at home. Ham and other sausages were a regular part of his diet.

However, as life began to be difficult in Essen for Jews, a couple of tragedies befell the family at home. First, Karl’s material grandparents came to live with them. Poor business planning, combined with the economic devastation of the times, put their business, H. & L. Freudenberg, a rather elegant department store, on Limbeckerstrasse, out of business, and the families combined households.

Then Oma became ill of a genetic disease, and died fairly quickly. A year later, her daughter, Karl’s mother, fell to the same disease. The household was bereft. 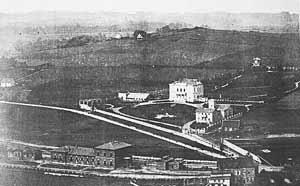 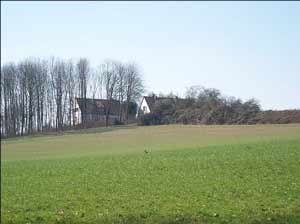 As time passed, life in Essen continued to grow difficult. He was treated badly at school by teachers and students, his father was depressed, and restrictions on Jewish activities all had their toll. He still had a playmate, Heinz Hirschland, later Henry, who was the son of Dr. Georg Simon Hirschland, one of the Simon Hirschland bank’s principles. Then, Karl woke one morning not long after his Bar Mitzvah to learn from his father that “The other Hartlands (Hirschlands) have gone! They went without telling anyone and without saying goodbye and left everything behind ….” Hannam, Charles, A Boy in That Situation: An Autobiography, P 112 (Harpers & Roe, 1977).

Then, Karl learned that his sister had found a job as a maid in the UK and that he would be sent away to a school in the UK to learn English. I am told that Franz Hirschland, my grandfather, who had settled in the US in the early 1900’s, had a part in finding these situations. Huge trunks of clothes and family treasures were packed up for both of them, and Karl was sent by train, with a tag hung from his coat, on the kindertransport. He first went to a hostel, where he was supposed to be learning English with other boys, and which closed sudden when the war started. Then he was sent to Wallingford , which was a youth penal facility, where his biggest learning experiences were in how to harvest potatoes and how to deal with boys from very much tougher circumstances than he was accustomed to.
According to David Panofsky, Margot’s step-grandson:

In England, life for Margot was hard and she took on the role of looking out for her brother who was only five years her junior and she was barely an adult. Georg Hirschland (married to Alfred’s sister El) asked my grandfather (Alfred Panofsky,  who was in England with his two children), to give what was then a tidy sum of money to Charles to help him get a proper education. In the mean time Margot worked as a maid, as a factory worker making bombers and eventually went to secretary school, although she always had much higher ambitions … Within a few years of arriving in England and arranging for her brother, Alfred and Margot married.

So seemingly out of nowhere, Karl found that he was going to a real boarding school. His sister, who worked in a home near the school had written family members, now in the US, and sought support for her brother. Karl understands now that Dr. Hirschland his wife Elsbeth, his former playmate’s parents, supported his schooling. His sister gave him a rather dire warning that the funding was limited, and he was not to be extravagant in buying school uniforms, supplies, and sundries, but Karl acknowledges now that this warning came more from his sister and their adaptation to difficult circumstances than it did from the Hirschlands. 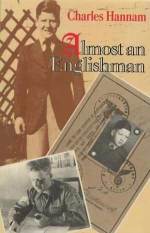 After the war started, Karl’s father stopped writing his regular cheering cards and letters, and was limited to 25 word Red Cross messages. Eventually, those stopped too. Karl later found that although his father had been offered a visa to and a job in Bolivia, he declined it because he felt he had a duty to stay with and care for his aging father-in-law, Louis Freudenberg. Charles believes that part of this decision was because his father was depressed. No big surprise. Both Max and his father-in-law were later transported to Therezienstadt. Louisdied enroute in 1942, and Max in 1944.

In his second book, Almost an Englishman, Karl talks about his school years and also of meeting, with his sister, Alfred Panofsky, the brother of Elsbeth Hirschland, wife of Georg Hirschland. Alfred had been acting as banker for Karl’s schooling funds, gave him a place to stay during some school holidays, and eventually married Margot, who helped raise the elder man’s two children. They never had children of their own.

Once he finished his schooling, at about age 17, Karl decided to join the military to help fight the war against the Nazis. That was when he changed his name from Karl Hirschland to Charles Hannam, at the suggestion of a superior officer. Charles recalls in a recent email that “my major said to me ‘with a name like that the Germans will shoot you if they catch you.’”

Charles, however, served most of the war in Burma, and holds the Burma Star, before returning home to England. He has children and grandchildren now, settled in London and southwest Britain. His sister, Margot, moved to the US a few years after the war ended with her husband, and they settled in the Tucson area. She died a few years ago.

I probably would not have heard of this connection had David Panofsky not written me to tell me of his favorite grandmother, Margot, and his favorite Aunt, Elsbeth. David later clarified to me that he had no blood connection to the family because Margot was his step-grandmother, and Elsbeth had only married into the family, but he wanted to share these fabulous women, both Margot, and Elsbeth, with me.