Earlier this year, I was contacted by Dr. Susanne Mauss, a German academic and researcher, who was writing a book and preparing an exhibition on the Jewish German lawyers in Nord-Rhein Westfalen who had been excluded from the legal profession by the Third Reich. She was seeking information and a photograph of Charlotte Grunebaum, later Hachenburg, changed to Hackett. I put Dr. Mauss in touch with Thomas Hackett, one of Charlotte’s sons. In his words: 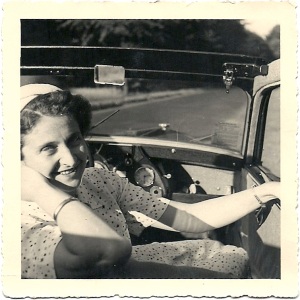 (Dr. Mauss was looking for) a photograph of my mother, Charlotte (usually known to her family, her husband and friends as Lotte) from the 1930’s, namely the period after she’d been barred by the “Nuremberg laws” from continuing her career in the legal profession.

My mother, although she’d qualified as a lawyer and had already been accepted (and may’ve even begun) as a Referendar (legal intern), was unable to continue her legal career because of the blocking measures then introduced. I had a photo which I passed on and which is now reproduced in the book which is entitled “Nicht zugelassen” (Not Allowed), published recently. It’s available on Amazon.de.

The book is a fascinating exploration of the lives of these professional men (apart from my mother and one other woman, Käthe Levy) and their families, their trials and tribulations, and in many cases their tragic fates. Some names from the deepest caverns of memory emerge – Susanne’s book refers to the friendship of (various Grunebaums) with Frank Opton (who apparently was linked romantically with my mother before my father came on the scene – news to me but I don’t think my mother was short of admirers and her relatively late marriage by the standards of the time was due more to her professional ambitions followed by the upheavals of the late 1930’s). … Also Hans Wetzler, whose son is a holistic doctor in London, apparently working a lot with the Haredi community.

The book consists of short (sometimes quite long in fact) histories of these men/families, what happened in the 1930s and after, supported by archival references and reproduced photos and documents.

In another email, Thomas noted that:

My aunt (by marriage) Gabriele (Gaby) Grünebaum (geb. Neumann) came from Cottbus to Munich University where she met my mother as they were both studying law there. My mother introduced Gaby to her brother Erich and the two married in October 1933 (almost 80 years to the day). I don’t think Gaby can be said to have been prevented from pursuing her legal career as their first child was born 14 months later (his parents took the post-March 1933 precaution of having the birth in London to give him a British passport – the British authorities were less hostile to immigrants in those days, possibly because they were rather fewer!) after which I think she applied herself more to domestic responsibilities. Gaby’s story can be found here.

Dr. Mauss commented that the book has created a landslide of information about Jewish lawyers who could not practice because of the prohibitions:

Today I got a phone call from a woman (daughter of a former attorney in Düsseldorf who was a colleague of Kurt Frank) who read the book and had further information for me. It is like a landslide. People read the book and remember things you can’t find in the archives. That is really important because in some years the “children” who still know the people on the pictures will disappear and nobody can ever tell their stories. This woman still got photos from her father with old friends from the years before 1933. I will meet her in November. This makes my work really satisfying when there are answers from total strangers.