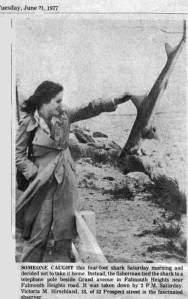 Just Victoria & a shark strung up on a utility pole.

Thirty years ago, my photo appeared in my mother’s hometown newspaper, the Falmouth (MA) Enterprise, and within days, I received a most surprising call. The woman who called me had the maiden name Hirshland, and she said she was part of the Pennsylvania branch of the Hirshlands (with a slight spelling change), descended from an Essen Hirschland who had emigrated in the 1800s and become a farmer in Pennsylvania.

More importantly, she told me that there was only one family that choose the name Hirschland, and that we were all related. The first Hirschlands were Herz Solomon, Jonas, and Markus.

I was only 18 when I met this Hirshland, and I did not record her name, but obviously the story stuck, and when I began my search for Hirschlands this fall, finding this family was high on my list. The notion that there were Hirschlands out there who I had no knowledge of stuck with me. And astonishingly to this non-genealogist, we have found about 1500 descendents of the Hirschland name, of whom about half are likely alive.

Fortunately, the PA Hirshland family makes good use of Facebook as a social networking tool. When I searched for Hirshlands, I found 10-20, mostly kids and young adults, but no one really knew the story of how they came to the States. One of these young Hirshlands asked me how he lost the C in his name, to which I explained that name changes were common when persons emigrated to the United States, especially in those days, when literacy was lower and foreign languages not widely spoken. 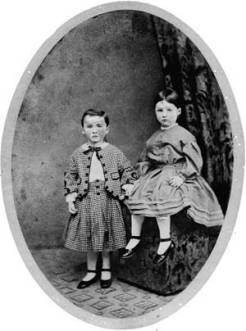 Google has been another important tool in this project, and one evening over the Thanksgiving weekend, I spent far too much time, looking at far too many Google pages, before I found the key. In 2003, a Lee Hirshland put a family tree up on Root Web. The oldest ancestors he listed were Isaac Hirschland born in 1821 in Sheinheim, Germany, and his wife, Lena Meier, born in 1837 in Essen. Those dates were within the range of die Familie Hirschland, a 39 page family tree produced in the 1930s. The names matched, the dates matched, and then I knew that the PA Hirshlands were descended from Jonas Herz Hirschland, one of the original Hirschland brothers, born in Steinheim, Germany. This was the brother of my original Hirschland, Salomon Herz Hirschland, who first settled the family in Essen.

I actually have some question about Lena’s birth year at this point, because it appears that Lena and Isaac emigrated with a babe in arms in 1948. If that were the case, Lena likely would have given birth at age 11, unlikely, but not impossible. Daniel found this history of Solomon (that babe) recently:

Isaac Hirshland brought his family to America when Soloman was but seven months old, and for a short time resided in New York, where he was engaged in butchering, in which business he was also engaged in connection with huckstering, after coming to Reading in 1857. He died June 1, 1896, at the age of seventy-six years. Mr. and Mrs. Hirshland had these children: Solomon; Fannie, m. to Isaac Samuels; Lee, and Harry. Isaac Hirshland was a Whig and Republican in politics.

Solomon Hirshland received his education in the schools of Reading, after leaving which he apprenticed himself to the boilermaker’s trade, and worked at that occupation until the strike in 1876, when he accepted a position with a Pottsville firm, in whose employ he continued until 1879. In this year he became traveling salesman for the A.J. Brumbach Woolen Co., continuing with that concern until 1882, when the Reading Pants Manufacturing Company was formed by him, his first location being the second floor of the Dives, Pomeroy & Stewart building. In 1896 he came to his present location, No. 533 Penn street , and here, in addition to manufacturing on an average 400 pairs of trousers weekly, makes a specialty of custom tailoring, in which he does an extensive business. Mr. Hirshland is an enterprising, up-to-date business man, of more than ordinary ability, and has always made a success of anything undertaken by him.

http://berks.pa-roots.com/books/montgomery/h21.html I think it is fair to say that a lot of Hirschlands (with or without the “C”) have been successful over the years.

So now I had fifth cousins, but what could I do with them. The tree I found on-line had no names listed for anyone living, so we had to go back to Facebook, and see who friended who. We discovered through tracking those friends that there were two distinct groups: the three sons of Lee Hirshland, a Reno broadcaster who passed away a few years ago, and the four sons of Samuel Hirschland, a Pennsylvania attorney who has passed away in 2001.

Samuel and Lee were first cousins, and their children are second cousins to one another, but really had no notion of where their family came from before it arrived in Reading, PA more than 150 years ago. Larry, one of the second cousins told me, there was the cemetery in Reading, with names, Isaac, Salomon and others, but nothing before that. I have found that a number of early Hirshlands (and Samuel L.) were buried in the cemetery of Temple Oheb Sholom, near Reading. The names listed there include Lena (wife of Isaac), and a number of her children. And oddly enough, the names listed on the register include the “C,” so it is hard to say when that letter was lost.

In a recently exchange of letters between David Hirshland (no C) and David Hirschland, the no-C David commented that he wasn’t “entirely sure why we dropped the “c” but I have always suspected my great grandfather Isaac who emigrated to the west coast – Seattle and then Boise at the turn of the century – probably wanted to appear less Jewish in an area Jews must have been very rare.” In additon, I learned recently from Bob Hirshland that the contact between the two sets of “no-C” cousins is really only recent. They knew about one another, but until about 10 years ago, there was little contact between the two sets of brothers. Since then, the cousins have had a couple of reunions, and even one before their fathers died. So now, they stay in touch, and even had reunions, but no one has been able to tell me who the woman at met in Falmouth might have been.

Since the original posting of this article, I have received a handwritten tree from Larry Hirshland, which has more detail in it than that which was posted on-line. We have added these additional Hirshlands to the tree. There seems to be a contingent still in the Reading area that is not really in touch with the ones we have contacted. We have names, but not a whole lot else. If anyone is in that area and wants to poke around a bit, it would be great to get in touch. I have also had a chance to meet Mike Hirshland in December 2010 and other members of that extended family March 2011.