Family lore is that these men are the five sons of Herz Salomon Hirschland, one of the three original Hirschland brothers.

END_OF_DOCUMENT_TOKEN_TO_BE_REPLACED

In late April 1915 Franz Hirschland (Papa) was having lunch with a business associate. The paper was folded back either to an advertisement for the sailing of the Lusitania or an article warning that the Lusitania was carrying arms for the British war effort and therefore fair game for German U-Boats. Those warnings were appearing more and more often in the American press.

The two began to converse about the Lusitania and the yellow journalism surrounding the reporting on Germany in particular. During the conversation the associate said, “I have a friend who is shipping picric acid (an explosive somewhat like TNT) on the Lusitania.” Papa said that the conversation just glossed over the sentence.

Two weeks later, on May 7th, the Lusitania sank within sight of land off the shores of the Old Head of Kindsdale, Ireland, In 18 minutes 1,198 of the 1959 people aboard died.  America exploded with anger and headed for war (though it took them some time to get there). END_OF_DOCUMENT_TOKEN_TO_BE_REPLACED

Detail of Hirschland crest atop the Villa door. This crest was also at Franz Hirschland’s house in Harrison, NY. thanks to Laura & Anne for allowing us to use it.

Alice Moore wrote Victoria about the Hirschland Villa, and stories she had shared with her grandmother about this fabulous house. Here are some of them:

My grandmother, Waltraude Hirschland Sendlinger, was born in 1900. She was an identical twin and the girls were a “surprise” to her parents, Marcus and Maria Hirschland, as they already had three older children. END_OF_DOCUMENT_TOKEN_TO_BE_REPLACED

When Marcus Hirschland, who was the owner of one of the most popular Department Stores in nearby Mannheim, built himself and his family a vacation home near Schriesheim, Germany, in 1903, who would have known that it would be in the news more than 100 years later.  But when M. Hirschland found mention of the Hirschland Villa, he forwarded it to me for follow up. Original Article in translation.

END_OF_DOCUMENT_TOKEN_TO_BE_REPLACED

After Dr. Franz Herbert Hirschland received his engineering degree in 1902, it was time to see the world, and perhaps do a little business along the way. Franz, our grandfather, left Essen, Germany, for New York with a business proposition in hand: he was to determine the opportunities for Goldschmidt Chemical to build its first American factory. He got that job done, opening Goldschmidt Detinning, and soon becoming its president. But like many young men, he found certain distractions along the way, a principle one being a stunning young woman named Gula Vixie Anderson, our grandmother.

Of course, I could end the story there, but there were a few events along the way that made this more than the usual courtship. They courted, fell in love, and wanted to marry, but the problem was that Franz needed to get his parent’s blessing because Gula would take him away from them, and also……. She was a goy. Nothing against goys, of course, but would you want your son to marry one? So Gula made a plan. END_OF_DOCUMENT_TOKEN_TO_BE_REPLACED

In 1914 Franz (Papa) and Gula (Gonny) Hirschland took one-year-old Richard (Dick) to Essen to visit the family. With them were Susan Anderson (Omi) and Mary Sheridan (Nana to Richard and Herb). At the time Papa was President of the American branch of Goldschmidt Detinning – a recycling company that separated the tin out of tin cans so that it could be reused. 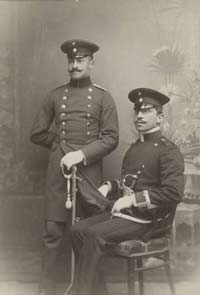 Franz (seated) and Friend in uniform.

War was in the air and the family and friends were urging Papa and Gonny to leave. Papa was conflicted. He was the highest ranking Jew in the German Army and he felt that he had a responsibility to honor his commission. One morning in September, Mr. Goldschmidt asked Papa to accompany him to the local constabulary. The head constable showed Papa a telegram from the Kaiser (Papa’s father had been decorated by the Kaiser by the way). The telegram said, “All German nationals who wish to leave the country should do so immediately. The bluffing is over.” If Papa stayed, he not only would have been trapped with his family, but he would have had to fight. END_OF_DOCUMENT_TOKEN_TO_BE_REPLACED

Just Victoria & a shark strung up on a utility pole.

Thirty years ago, my photo appeared in my mother’s hometown newspaper, the Falmouth (MA) Enterprise, and within days, I received a most surprising call. The woman who called me had the maiden name Hirshland, and she said she was part of the Pennsylvania branch of the Hirshlands (with a slight spelling change), descended from an Essen Hirschland who had emigrated in the 1800s and become a farmer in Pennsylvania.

More importantly, she told me that there was only one family that choose the name Hirschland, and that we were all related. The first Hirschlands were Herz Solomon, Jonas, and Markus.

I was only 18 when I met this Hirshland, and I did not record her name, but obviously the story stuck, and when I began my search for Hirschlands this fall, finding this family was high on my list. The notion that there were Hirschlands out there who I had no knowledge of stuck with me. And astonishingly to this non-genealogist, we have found about 1500 descendents of the Hirschland name, of whom about half are likely alive. END_OF_DOCUMENT_TOKEN_TO_BE_REPLACED

It is Herz Solomon or Solomon Herz, and who was the First Hirschland?

Contributed by Daniel Kester
(who connects to our tree through Herz Solomon)— updated Nov. 3, 1010

There are two main sources that I have used for Hirschland data. The first is a document written in the 1930’s, called “Die Familie Hirschland”. I have no author or precise publication date. It starts with Salomon Herz (who I think is actually Herz Salomon, see below) and his wife Golde/Göttgen Levi, and their three sons, Salomon, Marcus, and Jonas.

The second source is a book by Siegfried Porta, “Chronik der Familie Löwenstein-Porta”, published in 1922, about the Bassevi/Löwenstein/Porta families. It starts with Joseph Bassevi in 1545(!), and one branch ends with the children of Israel and Esther Levi, including their daughter Golda, who married “Salomon Herz (Hirschland)” (the same person who I think is actually Herz Salomon). END_OF_DOCUMENT_TOKEN_TO_BE_REPLACED