When Marcus Hirschland, who was the owner of one of the most popular Department Stores in nearby Mannheim, built himself and his family a vacation home near Schriesheim, Germany, in 1903, who would have known that it would be in the news more than 100 years later.  But when M. Hirschland found mention of the Hirschland Villa, he forwarded it to me for follow up. Original Article in translation. 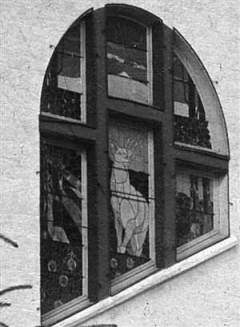 Hirsch window on front of house.

Hirschland Family at villa with crest above. Markus Hirschland and Maria Daugardt Hirschland in rear. Governess standing next to Markus. Johanna – standing on right (b 1890), Gertrude – seated with fox fur wrap (b 1891), Kurt (b 1893), and Twins – Editha and Waltraude (b 1900). All photos except top supplied by Alice Moore and Laura Roe.

Frau Kuntermann, the author of the original article wrote me that:
“The Hirschland Villa (or for some people the “Freyhof”) is one of the most beautiful buildings in Schriesheim. It is built on a hill above a road to another small town. Everybody who drives that road knows the house, and some people may have asked themselves what the history of that house might be. Some weeks ago I got the chance to find out more about it. From the owners I received the information that it was built by a Jewish businessman more than 100 years ago. That was very interesting for me because I wrote a series for the newspaper about the former homes of Jewish inhabitants of Schriesheim.”

The title of the articles was The Owners Couldn’t be More Different. The article described both the beauty of the recently restored house, owned by Markus and family until 1925, and that is was acquired by “compulsory sale” in 1933 by Dr. Heinrich von Faulhaber, a dentist who was a dedicated supporter of the NSDAP (the Nazi Party). The article describes how he chiseled in the stone walls of the house evidence of his ownership:
“The fact that he was as well some kind of mayor of the city of Ilvesheim he had chiseled into stone. Another inscription had later vanished. It said that the house was bought in ‘the year of the national socialist uprising.’ Maybe Faulhaber removed it the moment the US Army came near Schriesheim. The house became a command post of the Army. Afterwards, Faulhaber committed suicide. His family lived in the house until 1963.”

Although Frau Kuntermann’s article was not correct in all family details, it was based on the information that she had available from the current owners, and restorers, of the house. Before restoration, the house was run as a boarding house, and it “was in such a miserable condition that the rain poured through the leaky roof,” according to the article. We have put Alice Moore in touch with Frau Kuntermann, Alice says that Frau Kuntermann has expressed interest in gathering further history about the house and its family.

Though the story of the house is fascinating, even more special is that this story has helped welcome into our family some more lost family members.

Daniel Kester found Laura and Alice through Facebook, much to everyone’s surprise, and Alice helped fill in some holes in the Hirschland family tree. (If you check Daniel’s Hirschland family tree  you can find them.) Markus’s and Marie’s children included a doctor (Johanna), an opera singer (Gertrude), and engineer (Kurt, later Curt), and Waltraude, who married into one of the founding families of Munich. Two other children died young. Alice and Laura are descended from Waltraude.  At this point, Alice and her progeny are the only known living descendents of Marcus Hirschland.

When I first wrote Alice, and introduced myself as a cousin, she was thrilled, because both her parents were only children.  I assured Alice that now that we had found her, she had hundreds of cousins. Alice and her children live in North Carolina.

One thought on “The Hirschland Villa”