When I was a child, my mother used to take me regularly into New York City to visit the Metropolitan Museum of Art. I was fascinated, when  as she pointed out to me as we walked up the grand staircase to the second floor painting galleries, that my grandparents’ names were carved into the walls of that staircase. I never learned what they gave to the museum to deserve such recognition, but it must have been big to be carved in stone: smaller gifts, I knew, such as one by our father, merited smaller recognition, like life-time memberships. A search of the MMA database shows 102 items under the name Hirschland.

As wealthy Jews in Germany, before the Hitler era, the Hirschland family was known as a major supporter of the arts.  My great-uncle, Dr. Georg Hirschland, was a member of the Essen Museum Society, and was involved in Essen’s acquisition of the “’Osthaus’sche Sammlungen’ (the Osthaus art collections) – which today personify culture in Essen,” as set forth in The History and Fate of the Jews of Essen: A Memorial book to fellow Jewish citizens of the city of Essen, by Dr. Hermann Schröter p. 6, with Hirschlands donating more than a million marks to the collection.

From the MMA database, copy after Goya. Note at the bottom: “Another weak copy or version of this portrait, once in the collection of Baron Edmond de Rothschild, was exhibited in 1937 at the California Palace of the Legion of Honor, no. 19, as lent by Dr. Franz Herbert Hirschland.”

Also from Dr. Schröter:
When Dr. Georg Hirschland wanted to emigrate in 1938, his art collection became a subject of negotiations. Because many of his paintings were considered to be valuable cultural treasures they were on the prohibited list, which meant that their export out of Germany was not allowed. Despite the political climate, the Museum Society acknowledged the merits of the family, but believed that in order to rescue the paintings, the value of the collection had to be appraised and then purchased. The objective appraisal amounted to 500,000 marks. The fact that the family received only 7,000 dollars of the appraised value is illustrative of the measures used by the authorities to virtually dispossess emigrating Jews by paying them only six to ten percent of the value of their property. During this period the Essen museum obtained paintings by C. Daspar David Friedrich, Carus, Menzel, Rottmann, von Marees, Clausen-Dahl, Daumier, Van Gogh, and Cézanne. After the war, most of them were returned to their former owners; only some 19th century pieces stayed in the museum.

Meanwhile, my grandfather had already moved to the United States, and started acquiring art of many types. A lot of words were acquired when the artists were not yet popular and other pieces because they were special in some way. In visiting our grandfather’s house, one could see, wandering from room to room, paintings by Renoir, Van Gogh, Goya, statues by Kolbe and Degas, and a great deal more.

There is a lot of on-line evidence of this art collection, as well as memories from Hirschland family members who met Franz and received tours of the house. In our early correspondence, Charles Hannam, né Karl Hirschland, who fled Germany to England on the kindertransport, told me about meeting my grandfather grandfather. He commented: “I met Franz H. in Westchester (County… Harrison) in 1950. I remember his rather magnificent art collection. It included an El Greco and a Goya. I met him with my sister Margot, who had married Alfred, the brother of Elsbeth, wife of (Dr.) Georg (Hirschland).”

A schoolmate of my uncle Herbert was Sylvan Cole, who later became a premier deal of fine art prints in New York City. He regularly visited the Harrison residence. In an oral history taken by the Smithsonian Institute in 2000, Cole said:

Anyway, Dr. Hirschland had a Daumier, “Third-Class Carriage” – or second class, I forget. A small version. El Greco that maybe is not an El Greco. Van Gogh, Renoir, Degas, Cézanne, and a host of other wonderful paintings in his home…. 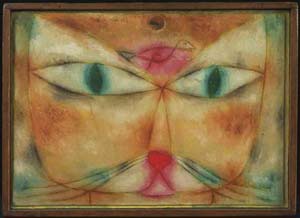 And the other thing I remember is that at the end of the room – behind Dr. Hirschland, on the wall in the dining room, was a Cézanne of a view of a hillside. And that Cézanne [Gardanne, 1885-86] is now at the Metropolitan Museum of Art. And I go and visit it – to see my Cezanne. And in my bedroom, I remember two paintings. One was a painting of [Paul] Klee of the famous cat with the whiskers [Cat and Bird, 1928], which is now at the Museum of Modern Art. And I remember there was a Franz Marc of blue horses. And that’s all I remember. But Dr. Hirschland used to take me around and explain the pictures. I was the only kid that had any interest in that.

Many years later, when we were teenagers, our mother introduced my siblings and me to a couple of portfolios of etchings by various artists, including Bellows, Rembrandt, Degas, and Daumier. Our grandfather had apparently bought them in large quantity when they were cheap, and given them to us. It would not surprise me at all to learn that some had come from Sylvan Cole. Obit from the NY Times.

My sister Joan Meijer recalls some of the art and antiques:

In the Library were an El Greco and a Lucas Cranach – which Papa gave to the Met.  In that entrance hall was a picture that turned out to be a fake: a wonderful Goya, beautiful – mother and child.  Papa also had that Klee upstairs by his bathroom, a Georges Rouault and a bunch more originals scattered throughout the house.  There was also some pretty neat sculpture in the house. Collecting art was a big deal in Pap’s family. There was a gigantic and very famous Gobelin tapestry in the formal living room and some other pictures and a carving of some saint…. I think those were also donated to museums.

The Klee was later donated to the Museum of Modern Art, in Joan and her full sister Suzy Prudden’s names.  Other pieces benefited other museums.

This art, in addition to being there to be enjoyed, also turned out to be a bit of a life insurance policy. As my grandmother, Gula, aged, and Franz had passed on, funds needed to be raised to maintain Gula in an appropriate lifestyle, and our Uncle Herbert took one of the dining room Renoirs to sell. He told his mother that it was being cleaned, and had it reproduced on canvas with a high quality photographic technique. The reproduction as returned to the original’s location. I recall hearing once of a relative who visited Gula, and walked into the dining room, and exclaimed loudly that there was something very wrong with the painting. Herbert quietly explained what had been done and why. Gula’s vision at that time was bad enough that she could not tell the difference.

Finally, from second cousin Thomas Hackett (see his picture on the reunions page):

Here’s a story about your grandfather (Franz Hirschland) told when I last met him (it was in 1965 or 1966). As you may know, he was a great collector and connoisseur.  In the 1920’s or maybe even earlier, he went into an art gallery in New York and saw a picture, which he fancied – it was either a Cézanne or a Van Gogh. He told the dealer that he would take it. It was wrapped up in brown wrapping paper and Franz took his picture under his arm and calmly rode the subway home.  He also recounted that in those days, it was very common for the subway in the evening to be filled with men and women in evening clothes, going to the opera at the Met.

I am aware that art of this quality was owned by Hirschlands across the Unites States.  Web searches reveal some of it, and also conversations with some who knew and visited other Hirschland families. Those are not my stories to share, though I would be glad to post any additional information that family members would care to send me.