The story of the Zamzam and how six-year-old Peter Levitt, his sister Wendy, and their mother Kathleen (nee Hirschland) survived its being shelled and captured by a German Raider in 1941 could be just another sad WWII story. Yet our cousins survived the sinking and the almost a year and a half of imprisonment afterwards, finally traveling from Liebenau, Germany, to Palestine, as part of a prisoner exchange, and eventually to a delayed reunion with their father and husband, Lionel Levitt, in South Africa.

Good humor, luck, and perhaps a bit of subterfuge by Kathleen as to her origins, saved the family. Peter recently published a book on these events, A Memoir of the Sinking of the Zamzam and Subsequent Events, (Lugus Publication, Toronto 2011), based on writings of his mother about the events, the writings of others who voyaged with them, photos and news clippings of the time, and his own six-year-old’s memories of those days. Though the book does not yet have a US distribution system, Peter would love to share his memoir with those who are interested.

Like the Lusitania, sunk by German forces during WWI, the Zamzam was a passenger ship under the flag of a neutral country, sailing from the USA to South Africa via Brazil. For some reason (there are conspiracy theories), it sailed blacked out and under radio silence across the South Atlantic, when early April 17, 1941, it came under fire by the Atlantis, with 59 shells fired, and 9 striking the Zamzam. Peter and family, who were on the ship traveling to reunion with husband and father in Durban, South Africa, awoke as the shelling commenced, and quickly fled to a lifeboat with few possessions.

The Zamzam damaged by shelling. Photo used with the permission of author, originally shot by David Scherman of Life Magazine while Peter squirmed in his lap. Getty Collection. 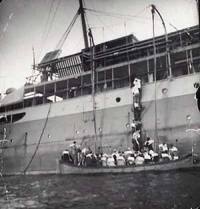 Zamzam passengers disembarking. Photo used with the permission of author, originally shot by David Scherman of Life Magazine while Peter squirmed in his lap. Getty Collection.

There followed a couple of months where the prisoners traveled first by ship (the Dresden) to occupied France, where the Americans, as citizens of a then-neutral country, were repatriated with the help of the US Embassy. The Canadian and British passengers became prisoners of war and were transported by a variety of means thorough France and Germany. These weeks of travel were punctuated by a number of stays at German prisons, until the women and children reached a “lunatic asylum” in Liebenau. Stops enroute included Wesermunde (“My memory of arriving at this prison was that we were all very depressed. Mother lay her fur coat on the cold damp floor slightly smelling of urine, and we all lay down on it holding each other tightly to keep warm.” P.89), Bremen (“The cells were horribly cold and damp, the beds like boards, the buckets in the corners stank and the tin mugs etc. were filthy.” P.100), Hanover (“This apartment was I think the worst accommodation we had yet met. It was about 10 feet wide, and long enough to allow 13 small mattresses to be place in a line on the floor, with just enough room at one end for a wooden structure placed around a badly flushed W.C…. In this cage, 28 of us were to live until further notice.” P. 102), Stuttgart (Where the group for the first time traveled in open carriages and could actually see a part of Germany. This accommodation had clean sheets, allowed exercise, and even had two cold taps for washing.), and Ravenshaven, from which the party walked two miles to Liebenau. 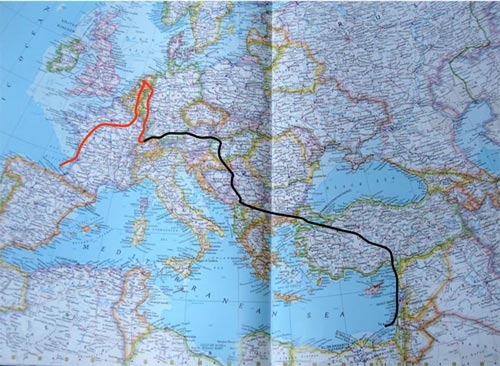 Travels of the Levitt Family. Used with permission of the author.

The stay in Liebenau lasted 16 months, and for the first time, the prisoners were able to receive and write letters to loved ones, and also received regular Red Cross packages with food, cigarettes, and other items that were not otherwise available. Peter writes,” I must admit that I was a bit confused about all that was going on but pleased with the improved accommodation after a life in the prisons.” P. 115. The group set up a school for the children, and were able to enjoy the outdoors somewhat. But the women were questioned about their origins.

Peter relates that his mother had thrown their passports out the Zamzam’s porthole before running for the lifeboats because British passports listed one’s religion, in case it was necessary to arrange a funeral while traveling. Since the name Hirschland was well known in German banking circles, Kathleen had probably agreed with her 17-year-elder brother, Sydney Harvey, that she would list him as her father should there be a need. Certainly, Sydney understood his sister’s choice when he received his first letter from her with the greeting “Dear Father.” “During the war Captain Harvey (nee Hirschland) was in the British Intelligence Service,” a fact surely not lost to their jailers. P.119. Peter noted, however, that at the time, he and his sister had not even known they were Jewish, and the family had never been observant. 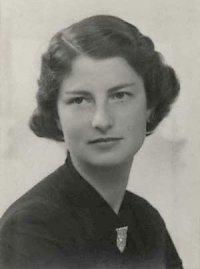 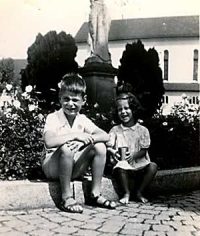 Peter & Wendy Levitt at Liebenau. Used with permission of author.

In October 1942, the family left Liebenau on short notice as part of a group of prisoners who were to be exchanged in Turkey for prisoners from Palestine. They traveled by train through Munich to Vienna, where they were even allowed some sightseeing, since they were unlikely to escape, then onto the Orient Express route, traveling through Austria, Hungary, Yugoslavia, Greece, and Turkey. A separate group traveled via Serbia, and were among the last permitted to pass through the border at that time.

“At Constantinople we embarked on a filthy ferry that proceeded to sail into the middle of the Bosporus where it anchored. …We were there for hours in cramped conditions and freezing cold and no food or drink. The ship was so dirty one could hear the rats gnawing. At last the German prisoners on the other ship passed us and it was all clear to proceed.” Another train took them through Turkey, Syria, and Lebanon to Palestine, accompanied by British officials. Peter, by now a seven-year-old who did not heed his mother’s warnings not to eat too much rich food too quickly, ended up desperately ill, and was hospitalized on arrival in Haifa. It was November, 1942, “the rainy season, and the earth was muddy. It was also eerie because one could hear the jackals at night and the whole area was desolate.” P.155.

The trip was not yet over, but now continued to Cairo, then up the Nile by plane. Further stops were in Khartoum, the Sudan and Lake Victoria, Mozambique, and finally Durban. The family stayed in a hotel there for two weeks, when Peter received an urgent summons to the lobby where his mother needed him immediately. He ran down to find his mother in the embrace of a strange, deeply tanned, man, and since Peter didn’t recognize him, Peter attacked him. After some calming and explanation from Kathleen, Peter learned that this was his father, whom he had not seen for two and a half years. The next day, Christmas Eve, they were traveling again, now as a complete family, and the following morning Peter awoke to find a stocking hung at the foot of his train bunk.

Information on the sinking of the Zamzam is limited on line (no Wikipedia article, but check out this survivors group website), and this slim book of Peter’s brings us a wealth of contemporary information about the sinking and the experiences of those who were taken prisoner afterwards. The fact that Peter, Wendy, and Kathleen are family makes this volume even more interesting. The photos and contemporary news articles about the disaster bring it further to life. If you enjoy reading tales of overcoming difficulties, you will enjoy this book.

2 thoughts on “The Sinking of the ZamZam”