My uncle Herbert Hirschland and his brother Rudy came to the Netherlands before the war started because of the rise of Adolf Hitler. Frits’ father, my Uncle Herbert, hide from the Germans in both my grandparents’ houses. He hid in The Hague (in a basement). My grandfather (Leen Boender, my father’s dad), was a member of the resistance in Rotterdam. He helped Jews with false passports and food stamps (ration coupons?). Uncle Herbert lived in their house in 1943/45, and before that he he lived in a chicken house. 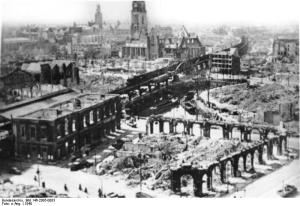 Rotterdam after the 1940 Blitz. Photo from Wikipedia.

END_OF_DOCUMENT_TOKEN_TO_BE_REPLACED 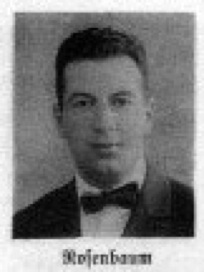 Though we do not yet have stories from the other members of our family that took up residence in South America.  I understand from the Nathans that their family textile business included a branch in Buenos Aires. I have also been told that some of the banking members of the family had offices in that area. A look at the Hirschland Map shows that we have identified records of family member in Brazil, Argentina, and Chili. Yet we have not been in touch with most of them, and would love to hear their stories.

Recently, Daniel received an email from a family member of Kurt Rosenbaum, a Communist party member of the German Reichstag. Although it was thought that he disappeared in 1937, Daniel was told that Kurt and his wife had actually emigrated to Bolivia in 1943.

From Sigrun: Kurt Rosenbaum,  was the husband of my father’s aunt ( Hedwig Steiner, during the war she had the name : Sarah Rosenbaum). In 1942 she traveled alone (Tran-Siberian Railway, then by ship across the Pacific) to Cochabamba, Bolivia. Her husband Kurt Rosenbaum followed her, maybe 1 year later. They lived in Cochabamba with other Germans  cannot tell you whatwork they did for living. I only can tell you, that Kurt Rosenbaum lived safely in Cochabamba. The couple later divorced.  They had no children. 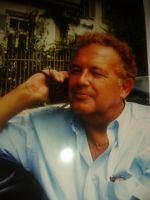 In the last minutes of 1986, my boyfriend and I returned early from our New Years Eve outing and the phone was ringing. It was a Frits Hirschland, calling from Amsterdam. I have never heard from him or of him before, and in fact, had not at the time known that Hirschlands still lived in Europe, having survived the war there. I still believed the family myth that my grandfather, Franz, had saved the entire family, while those who told that story were really talking only of our branch of it.

Frits was obviously quite drunk, and surprised that he had found me home, since it wasn’t yet midnight in Washington. He said he had looked through phone books, found my name, knew we were related, and decided to call and wish me a Happy New Year. We went through the “are we related” dance, and he debunked the family myth. I had the impression that he had not yet slept that night, though it was almost 6 a.m. in Amsterdam. END_OF_DOCUMENT_TOKEN_TO_BE_REPLACED