In 1914 Franz (Papa) and Gula (Gonny) Hirschland took one-year-old Richard (Dick) to Essen to visit the family. With them were Susan Anderson (Omi) and Mary Sheridan (Nana to Richard and Herb). At the time Papa was President of the American branch of Goldschmidt Detinning – a recycling company that separated the tin out of tin cans so that it could be reused.

Franz (seated) and Friend in uniform.

War was in the air and the family and friends were urging Papa and Gonny to leave. Papa was conflicted. He was the highest ranking Jew in the German Army and he felt that he had a responsibility to honor his commission. One morning in September, Mr. Goldschmidt asked Papa to accompany him to the local constabulary. The head constable showed Papa a telegram from the Kaiser (Papa’s father had been decorated by the Kaiser by the way). The telegram said, “All German nationals who wish to leave the country should do so immediately. The bluffing is over.” If Papa stayed, he not only would have been trapped with his family, but he would have had to fight.

Papa rushed home and informed Gonny, “Mammy, pack we are leaving this afternoon.” Gonny – who was a trained Wagnerian soprano – hit high C. Fortunately there were lots of maids in the household and the got their 17 trunks packed in time to leave on the 4:00 p.m. train. This turned out to be the last train to leave Germany before war was declared. Before he left Papa filled his pockets with gold. Gold, he figured, would be able to be used anywhere.

The family took a ferry to England. While they were crossing the English Channel war was declared. They found themselves in England – German nationals – the enemy. England had declared a bank holiday. Papa waited for hours in line at the Cunard Line in order to buy passage. Cunard was owned by the British government. When he finally got to the ticket window they refused his gold insisting on pounds only! 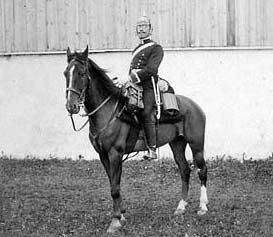 He wasn’t quite certain what to do. On an impulse he went to the Bank of England and knocked on the door. His brother Kurt had worked at the Bank of England for a time and an officer who was walking by the door recognized Paps, who looked a lot like Kurt, and let him in. They exchanged pounds for gold and Papa hurried back to the shipping lines. This time he tried the White Star Line and was able to buy steerage tickets for everyone. Steerage was not where the family was accustomed to traveling!

Omi spent the entire voyage in a deck chair. She got sick every time she went below decks. Gonny shuddered every time they talked about the voyage. “Rats” she would say as if that explained everything.

The interesting part of all this was that every single German national was removed from the passengers traveling on the Cunard Line and incarcerated in a Concentration Camp for the duration of the war. The passengers on the White Star line got through without incident.

Franz and Family returned home for the duration, but life was not as easy as it could have been. Franz was still a German National, and so Gula and Richard lost their US citizenship, by association. Uncle Herb (Dick’s younger brother) once commented to me that after he was born, he was the only member of the family to hold US citizenship. (All of this was rectified later.) Moreover, Franz was labeled an Enemy Alien, and this status restricted his travel . Ironically, his company was producing a chemical product that was critical to the war effort.

Ellis Island manifests show that the family arrived back in New York on August 14, 1914, on the Philadelphia.

One thought on “A Close Pre-WWI Escape”